His forefather Sheikh Yasin Makkhi came from Makkah and settled permanently at Babunagar in Satkania Upzilla, Chittagong and that is why his family is known as Makka Bari. 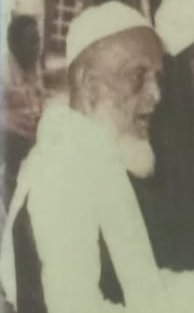 Allama Abul Barakat Muhammad Fazlullah (r.h.) was born in 1898 in the traditional ‘Makkahro Bari’ of Babunagar village in Satkania Upazilla of Chittagong district. According to family data, her forefather Yasin Makkhi came to Bangladesh from the holy city of Makkah. His father Maulana Nurul Huda (Rah.) was a famous scholar and spiritual devotee. He was a disciple of Maulana Rashid Ahmad Ganguhi (Rah), one of the architects of Deoband Madrasah in North Province, India. After gaining maturity in primary knowledge from his father, Allama Fazlullah (Rah.) got admitted into the then famous educational institution Daroga School, Satkania. He completed Fazil from Chittagong Muhsinia Madrasah (now Haji Mohammad Mohsin College) in 1919.

In 1920 he went to India for higher education. In 1923, he graduated from the famous educational institution Mazahirul Uloom Saharanpur with a degree in Hadith, Tafsir, Fiqh, Philosophy, Logic, etc. He became a disciple of Allama Khalil Ahmad Saharanpuri and Allama Abdul Latif Saharanpuri (Rah.), the creators of the then famous muhaddith Sunan Abi Daud’s commentary ‘Bazlul Majhud’. He also received spiritual discipleship from Allama Ashraf Ali Thanawi (Rah.). Considering his unique talent and sharp intellect, his teachers sent him to the post of Head Maulana of Akra Qudsia Alia Madrasah in Calcutta, India at the end of his studies at Saharanpur in 1923.

He became the Principal after one year due to his qualifications, diligence and efficiency. From 1923 to 1942. he held the post of principal and muhaddith and made overall progress in the madrasah. When he returned home in 1943 on the eve of the Second World War, the authorities of Chunati Hakimia Madrasah, one of the best institutions in Bangladesh, appointed him as the Superintendent with great interest. During this time, he made considerable progress in the Madrasah.

He was a rare linguist with multidimensional knowledge of the twentieth century in Bangladesh. He was fluent in Arabic, Urdu, Persian, and Bengali. Bengali and English were not widely practised among the Ulama at that time. Although they were proficient in Arabic, Urdu and Persian, they were always raw in Bengali and English, but Allama Fazlullah (Ra) was also very proficient in Bengali and English and had full command of the language of culture. Shamaile Tirmizi’s commentary ‘Banganubad Shamaile Tirmizi’ ‘Zuktir Kosti Pathore Islam’ ‘Qadianism’ and Bengali translation Shikwa was Jawab Shikwa are recognized as his immortal works in Bengali.

His proficiency in English is reflected in the English translation of various texts of ‘Zuktir Kosti Pathore Islam’. There was no narrowness in him due to his breadth of knowledge. He was liberal among the Islamic scholars and was respected by all. Allama Fazlullah (Rah.) was an extraordinary writer and poet by nature. He has many poems in Urdu, Persian, Arabic and Bengali. However, most of his poems are in Urdu. Because until recently, Urdu was the medium of instruction in the Madrasahs of this country and even in the subcontinent and it was also considered as the language of the scholars.

His works in Arabic, Urdu and Persian amaze the readers in literary judgment and aesthetic form of the poems. His write-ups are equivalent to those of Al-Mutanabbi, Sheikh Sa’ di, Shakespeare, Iqbal and Nazrul with regards to the subject matter of literature and philosophy of life. Allama Fazlullah (Rah.) has a signature of skill in all these matters but he was not interested to seek attention in general. If we classify his poems, it can be seen that there is a collection of poems of different classes in his poems. Such as Hamd, Naat, Mursiya or mourning poems, patriotic and Islamic awakening poems, gazals, educational, contextual poems and occasional poems etc.

Also was a well-known Muslim Scholar and an expert in Fiqh. He left many hand written manuscripts, which prove his high rank of scholarship and talents. He was the disciple of proverbial personality Maulana Rashid ahmed Ganguy.